Skip to content
Posted on 2014/08/142014/08/14 by 30 Is the New 45 Blogger
When I started seeing #Ferguson all over Twitter, before the two reporters were even arrested, I felt compelled to speak. Yet, I don’t live in Missouri and I blog on digital media not politics. Initially, I couldn’t see how sharing my opinion would help anyone other than possibly myself.

Yet, non-traditional sources are shaping the Ferguson news story via social media. When I watched Ferguson discussed on CNN’s Wolf Blitzer I felt overwhelmed by meaningless data whereas Twitter enables me to feel.

There are endless philosophical questions about whether citizen journalism is valid. We have all read statistics about how people seeking out “news” online get it from people with views like them. The inherent risk in citizen journalism is that non-journalists won’t get the story right. Even this morning one Anonymous Twitter account chastised a different Anonymous user for releasing the wrong shooters name. Ironically, Anonymous’ disclosure of the alleged shooters name was later discussed on CNN. What the Ferguson news story teaches me is that no one really knows how to properly distribute news right now. 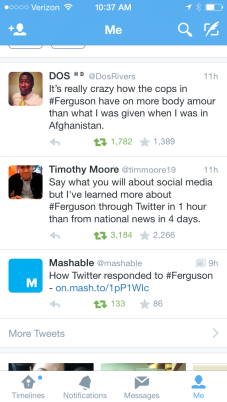 Citizen journalists make mistakes but traditional journalists mess up too. The difference is that social media doesn’t emphasize political neutrality at the risk of not telling the actual story.

Or, in the words of President Obama: “He was 18 years old and his family will never hold Michael in their arms again.“